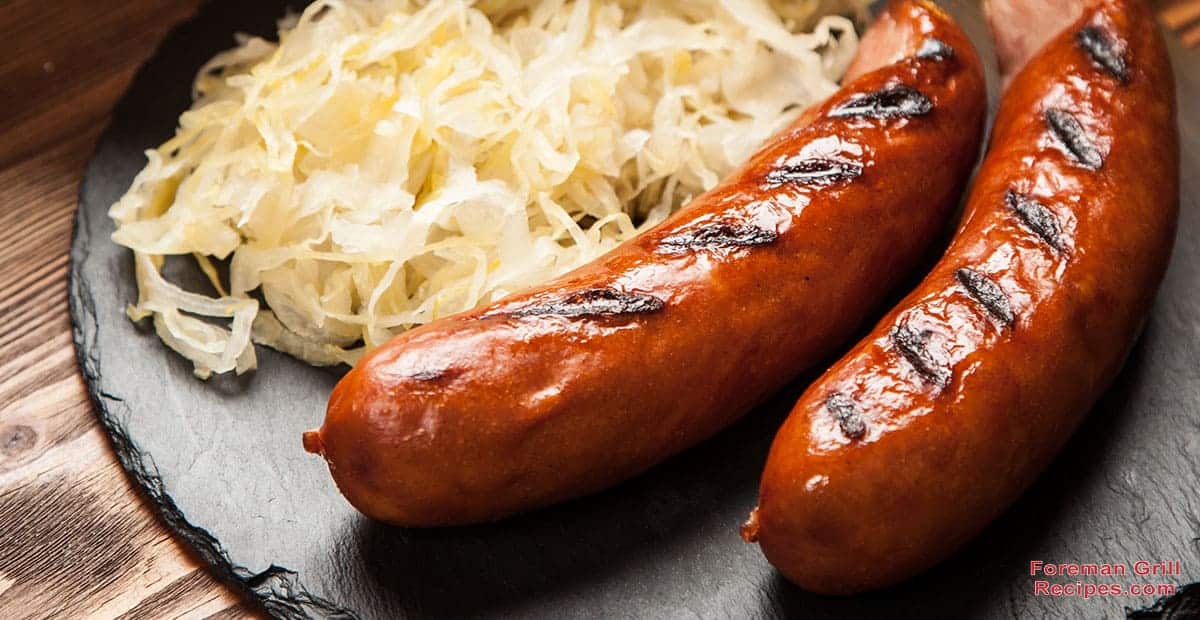 Bratwurst is a type of sausage with origins in German cuisine. The types of ground meat commonly used in making brats are veal and pork. Some brats have a combination of both meats. The basic seasoning blend includes salt, pepper, and nutmeg. Though, bratwurst makers will often add other seasonings and perhaps some fresh herbs, such as parsley. The meat and seasoning mixture is piped into natural casings, generally pork casings.

Bratwurst can be found either raw or pre-cooked. Once cooked or heated they are generally served inside a crusty hot dog style roll with toppings. The toppings commonly include mustard, grilled onions, and sauerkraut. A Wisconsin style bratwurst is sometimes topped with a locally made cheese sauce.

The preparation of bratwurst varies. Raw brats can be grilled, boiled, steamed, or braised. Pre-cooked ones are often pan seared, grilled, or even heated in a micro wave. A very common method in the Upper Midwest of the United States is to braise raw brats in beer, then finish them off on a grill. That is my favorite preparation, and the one in the recipe below. I braise on the stove top and then finish them off on a George Foreman Basic Grill.

I also keep some pre-cooked veal bratwurst in my freezer for a quick meal. I always have lacto-fermented sauerkraut and brown mustard in my refrigerator to have with the brats. I will take the brats out of the freezer in the morning to thaw. I poke a couple of holes in the casings with a fork and grill them on my GF basic grill with some olive oil for approximately 6 minutes until the casings are browned and bubbly. I rotate every 2 minutes to ensure even browning.

You can cook raw brats on a Foreman Grill. It takes quite a bit longer, approximately 15 to 20 minutes. The goal is to get the brats up to an internal temperature of 165°F. You will need to check with a reliable meat thermometer. Also, keep an eye on the fat that will build up in the drip tray when using fresh brats.

1. Poke the bratwurst with a fork to just break the casings a bit. In a deep skillet, place half of the onion slices, bratwurst, caraway seeds, and the beer. Bring the beer to a boil and turn the heat down to a rolling simmer. Simmer the brats for 15 minutes. Turn the heat off the braised brats and allow them to sit in the braising liquid while you move on to step 2.

2. Preheat your George Foreman Grill to high. Brush 1 TBS of the EVOO on the grill plates. Grill the remaining onion slices until just charred with grill marks on both sides. Set the onions aside to serve as a topping.

4. Open the rolls or slice open the bread pieces. Place these on the grill and toast lightly in the bratwurst drippings. You may have to do this in 2 batches.

5. Serve the bratwurst inside the rolls with your desired toppings.

1. Place all ingredients in a food processor and pulse until blended and smooth.

2. Serve over your bratwursts. You can warm this up so that it pours over the brats.

A bratwurst sandwich is a filling meal all by itself. However, there are some traditional sides that are often served with bratwurst. One is a German style potato salad with bacon and a vinaigrette. Another great side is a crisp red cabbage and apple slaw. Serve a large bowl of salted potato chips and dill pickle spears. An obvious choice of beverage is a good quality beer. Non-alcoholic beer is fine and lemonade for the kids.

This is a fun backyard afternoon feast. You can certainly braise the bratwurst ahead of time, or even the day before. Just store them in the refrigerator before grilling. Allow them to come to room temperature before finishing them off on the grill. You can easily use an Indoor/Outdoor Grill if you want to cook a larger batch of brats all at once. Just grill the bratwurst a couple of minutes longer, rotating often.